The Tour of Britain is back - two stages in Cumbria 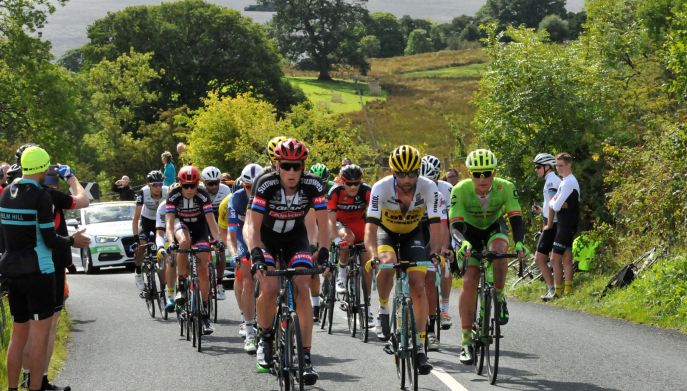 Cumbria is definitely the place to be for this year’s Tour of Britain with the county playing host to two full stages of British Cycling’s premier road cycling race in September.

It’s the first time that two full stages of one of Britain’s top sporting events have been held within one county and represents a major coup for Cumbria.

In a series of firsts for Cumbria:

This marks a major return of the OVO Energy Tour of Britain to Cumbria. The last time the race was held here was in 2016, when it started in Carlisle and finished in Kendal after passing through the heart of the Lake District, including the packed crowds on ‘The Struggle’ to summit of Kirkstone Pass. That stage attracted an estimated 175,000 spectators and generated more than £5 million for the local economy, with hotels, retailers and transport providers among many Cumbrian businesses to reap the economic benefits.

Cumbria County Council has agreed to host two stages of the 2018 race with the organisers SweetSpot and will be working with local delivery partners to make the most of the event.

One of the key aims of hosting the Tour will be to encourage more people to get on their bikes and take up cycling, promoting health benefits for young and old alike.

“This is fantastic news and we’re really over the moon that Cumbria has been chosen for two stages of the Tour of Britain. Nowhere else in the country has been given this honour before and it’s a real coup for Cumbria.

“This is a huge opportunity for us to make the most of this from a tourist and economic perspective, and also to get even more people interested and enthused about cycling. We’ll be working with our district partners, schools, Cumbria Tourism, Lake District National Park, Forestry Commission, United Utilities and also local businesses to make the most of this fantastic opportunity.”

“We are delighted to be returning to Cumbria with the OVO Energy Tour of Britain and are especially excited this year to be bringing two days of racing to the area.  Cumbria and the Lake District has provided some of the most memorable moments in recent Tour history thanks to its combination of stunning scenery, testing climbs and huge crowds and we are sure that we will see more of this across the 6 and 7 September.

“Wherever fans choose to watch over the two days they will be treated to some of the very best cycling action, but Whinlatter Pass is sure to be the mecca for cycling fans across the north of the country with the riders tackling the climb three times across the two stages.”

Live television coverage of the Tour of Britain is being expanded this year, with ITV4 screening each stage in full as part of a six-hour daily programme, meaning Cumbria’s spectacular landscapes and scenery will be shown even more extensively to a large television audience during both stages of the race.

We have created a webpage just for Schools. Here you will find lots of ways for your school to be involved including some exciting competitions to win VIP access to the Tour of Britain.