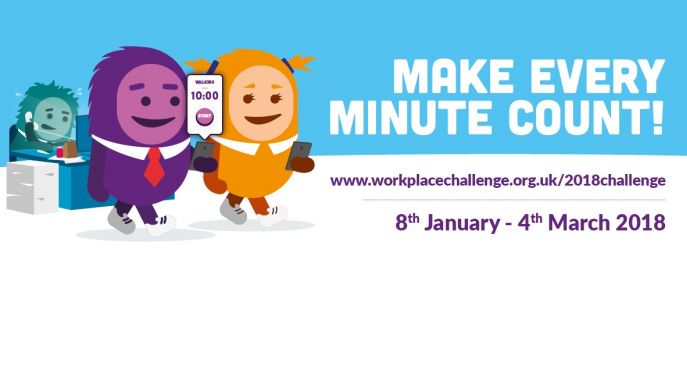 Figures show Brits sit down for an average 8.9 hours each day4 and one in four of us do fewer than 30 minutes of physical activity a week5 – alarming statistics which are the driving force behind a campaign to combat inactivity amongst busy workers across Cumbria.

The 2018 Active Workplace Challenge, now in its fifth year, is an eight-week initiative run in collaboration with Active Cumbria, designed to improve mental and physical wellbeing.

Running from January 8th until March 4th, this year’s message is ‘make every minute count’, as workplaces across Cumbria are encouraged to join forces and introduce ten minute bitesize chunks of physical activity before, during and after work.

It’s all part of Workplace Challenge, the national activity tracking resource, which brings together 30 County Sports Partnerships including Active Cumbria to support and promote physical activity in and around the workplace.

Statistics show 40 per cent of people in England do not exercise enough6, despite government guidelines which state that all adults should exercise for 150 minutes each week. In total, 131 million working days are lost to sickness in England each year7 and poor mental and physical health amongst our workforce is costing the UK taxpayer over £60 billion8.

Richard Johnston for Active Cumbria said: “We should not underestimate the impact this is having on businesses across Cumbria, not to mention the individuals themselves of course. Not enough people are meeting the recommended target for physical activity in a week – which means poor health, lower productivity and increased workplace absence.

“We want businesses to get involved and to support their employees in bringing physical activity into and around their working day. And what better time to start than January after the Christmas and New Year indulgence?”

Workplace Challenge encourages employers to sign up and get involved, building on evidence from previous campaigns that team collaboration and peer support can be successful in getting people more active.

Employees can visit the Workplace Challenge website and track their activity through the eight-week challenge and beyond, easily comparing activity levels to other participating individuals and organisations across Cumbria and nationwide.

Active Cumbria will also be supporting the Run Every Day (RED) January Initiative from Mind, a charity challenge helping to shine a light on mental health issues. RED January fits in really well as a start to the 8 week long workplace challenge which focuses on encouraging workers to walk, jog, run or cycle one mile each day, with a particular emphasis on stepping away from their desks during the lightest and brightest part of the day and tackling the culture of a desk-bound lunch. NHS guidelines state that getting plenty of regular exercise, particularly outdoors and in daylight, can help to improve symptoms of Seasonal Affective Disorder (SAD).

To find out more about how your workplace can get involved in the 2018 Active Workplace Challenge visit www.workplacechallenge.org.uk/2018challenge