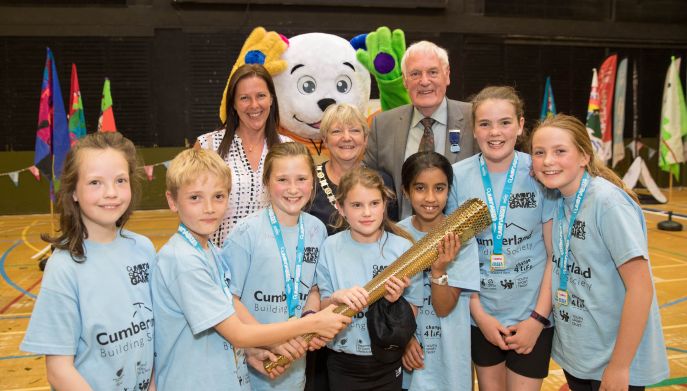 Young people across Cumbria showcased their talent in county-wide festival of sport.

A great day was had by all at the Cumbria School Games, where the sun shone making it a thoroughly enjoyable event.

The event is the last of four county finals that have taken place in Cumbria this year. A total of around 1100 young people aged between 5 and 19 have competed in 12 different sports.

All the teams participating in the finals had qualified via a series of local competitions, and the standard of competition across the sports represented this. The day was an opportunity for many of the children to experience a major multi-sport event for the first time.

Becky Wolstenholme, School Games Officer for Eden, said: “It is absolutely fantastic that Eden not only compete against hugely populated districts such as Carlisle and Furness but actually come out on top.  With commitment and dedication from our schools and the Network of Eden Valley Sports Partnership we work together successfully which is paying dividends for the young people in Eden. Consistency in all sports is key to our success”

Roger Jackson, Orienteering Lead Officer, said:“The level of competition was really good and it was brilliant to have a full set of teams for each district. Alistair Thomas and Daniel Spencer were excellent ambassadors for the sport and helped a great deal with the overall organisation on the day. The Young Leaders from Trinity School were totally outstanding; they helped keep the competition on track and were a superb asset to the event. Chances Park was perfect as a venue, the facilities at Morton Community Centre were great, the sun shone and it made for a wonderful day.”

Cllr Sue Sanderson Cumbria County Council said: “It’s been an honour to attend Cumbria School Games as one of my first visits as the new Portfolio Holder for Schools & Learning. Cumbria School Games provides a great opportunity for Children across the County to get involved in a variety of Sports and to compete in a fun and supportive environment. The Games also gives young people opportunity to try different roles within sport, whether it is as a player or referee, the programme provides excellent opportunities for all young people to make a positive and active contribution to their school.”

Nationally, the programme is backed by National Lottery funding administered through Sport England. The county finals events are delivered and developed by the Local Organising Committee supported by Active Cumbria, the Sport and Physical Activity Partnership, who are part of Cumbria County Council’s Public Health & Communities Service and is made possible through local qualifying competitions organised by six district School Games Organisers.

Jack Green of Cumberland Building Society said: “It’s great that we’re supporting the Cumbria School Games again this year. We’ve supported the event for over 10 years now, and it’s always fantastic to see so many young people actively involved in sport from all over Cumbria.”

Richard Johnston from Active Cumbria said: “The students who took part today represented their areas with pride and enthusiasm. The various venues in Carlisle were hives of competition and the there was a real sense of enjoyment amongst those taking part.

The atmosphere at the closing ceremony was certainly a testament to that. Organising an event such as today and the other competitions that take place throughout the year takes a lot of commitment by a number of different groups of people, I would like to thank all the student volunteers, staff and parents who contribute so much to the success of the school games.

Our School Games Organisers undertake work every week to help support schools in these sports and without them the students would not have the Level 2 competitions that enable them to qualify to take part in these county wide events.

Full results are available at www.cumbriaschoolgames.org