Schools Pedal Their Way to Health 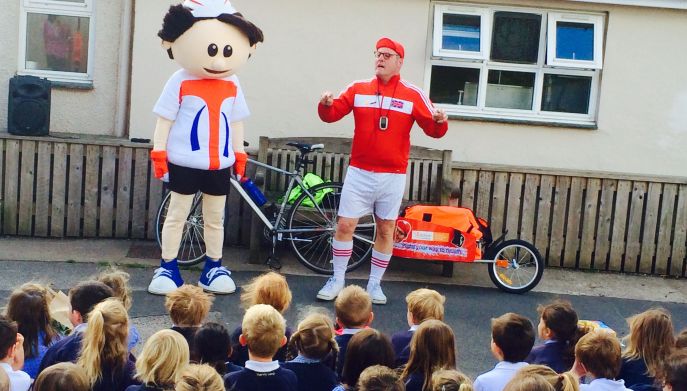 Mr Stretch, PE teacher extraordinaire aka Garry Gifford, from the Bread and Butter Theatre Company in Ulverston is embarking upon a fantastic journey around our great County of Cumbria visiting schools to talk about the Tour of Britain coming to Cumbria and all things cycling, inspiring the children of Cumbria to become more physically active.

As part of his two week ‘Pedal Your Way to Health’ tour Mr Stretch will visit 18 schools, educating, engaging and inspiring approximately 3,500 children through the means of music, magic, movement and laughter. The tour will take Active Cumbria and Mr Stretch to each district across the County beginning and ending in Allerdale where both stages of the upcoming Tour of Britain in Cumbria will finish. The finale of the Pedal Your Way to Health tour will end with a big event at Seaton Academy where Mr Stretch will be joined by ToBi the Tour of Britain Mascot, the Mayor of Allerdale and other dignitaries and sponsors.

Mr Stretch, a regular at the Cumbria School Games says “there really is an activity for everybody to try! I encourage the children to get out and about during the summer, cycling is a great activity for all the family and the roadshow is a great way to engage the children, they all leave wanting to do something which is great”.

Whilst this all sounds like great fun there are some key messages he will convey to the schools including the importance of building 60 minutes of physical activity into their daily routines. The tour also touches upon the importance of eating a balanced diet, including food heroes and villains, whilst encouraging us all to make small changes such as sugar swaps utilising resources from the Government’s Change 4 Life programme.

“We really value the interactive way that Mr Stretch gets his message across, we recognise that the Tour is right at the start of the first week back at school following the summer holidays, so we hope you use the roadshow and accompanying schools pack as an opportunity to help build the buzz before September.”

Alongside the Pedal Your Way to Health roadshow, Active Cumbria, part of Cumbria County Council will be providing all schools with a resource pack about how to get involved in the Tour of Britain when it comes to Cumbria in September. In addition they will be launching two competitions in schools with opportunities for children to win a prize of a lifetime. These opportunities have been funded by Cumbria County Council’s six Local Committees and the Lake District National Park Authority.

The first competition is to design the start flag which will be used to start Stage 6 of the Tour in Barrow, the entrant with the most creative and interesting design will get the chance to wave off the UK's biggest professional cycle race with their flag when it kicks off in Barrow on Friday, September 7. The second competition is to design the winning jersey which will be created and the winner will get to present their design to the winner of Stage 6 at the grand finale at Whinlatter.

Entries must be received by the 6th July. Entry forms can be downloaded from www.activecumbria.org/tob

“I really hope schools and communities get behind the tour, as they have done in previous years to celebrate the Tour of Britain in Cumbria. Having a large scale outdoor event such as this is great for the county as a whole and I know there are community events planned across the county to coincide with the tour promoting Cycling as well as health and wellbeing in general.” 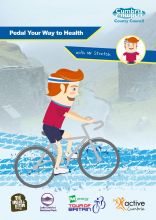