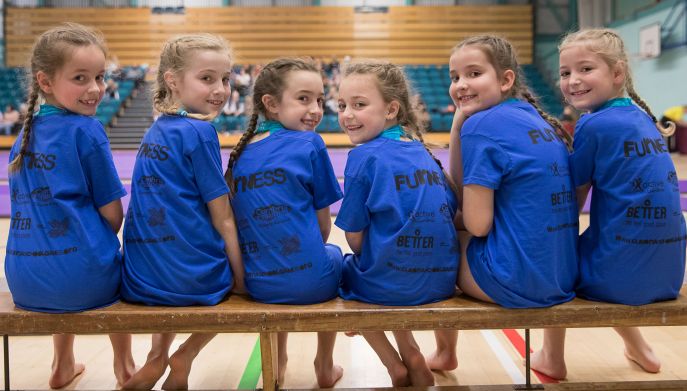 Months of practise, determination and sporting achievement culminated together in three spectacular finals at the Spring Cumbria School Games in Penrith, with over 430 children taking part in the events.

Organised by Cumbria County Council's Active Cumbria Team the event saw schools coming from across Cumbria to represent their district after having qualified through Intra and Inter school competitions organised by their local School Games Organisers.

"The MLD/SLD tag rugby event is a great event which brings together multiple programmes we deliver. A key target of the RFU is to bring the game to new audiences and provide a positive experience. This festival allows us to do that whilst developing our young volunteers who volunteer in clubs. Thank you to all partners for providing the platform to deliver this event and we hope to create a sustainable link with clubs going forward".

The atmosphere was electric for the Sportshall final, with all school teams cheering and encouraging their athletes on whilst they tackle the exciting relay races and challenging field events. The event was supported by 10 young leaders from Lakes College, West Cumbria who officiated and judged the event.

The overall winners were Yarlside Academy who came first place for Team Furness.

“This is only our second year at the County Finals, last year we came 5th place, so our aim was to beat that and they’ve exceeded this target and have won the county champions! They have trained extremely hard and are a credit to themselves, school, Furness and Cumbria”.

“The event went really smoothly which is down to the hard work and dedication that Active Cumbria put in prior to the event. It was great to see all of the young athletes compete and enjoy themselves. A massive well done goes to Victoria Academy and Yarlside Academy for representing Furness impeccably. We were over the moon to find out that Yarlside are the county champions, well done to them and to Miss Swarbrick who has really brought them on”

Bethan Lishman, team captain for Deaflympics GB came to inspire the youngsters taking part, showing off her 4kg hammer to the children and telling her story as a deaf athlete leading Team GB out to a 70,000 strong crowd as flagbearer for Deaflympics 2017, Bethan said:

“It was great to be at the County finals, it’s such an energetic event that Active Cumbria organise. It was amazing to see the talent of Cumbria first hand and most importantly all having fun. Well done to everyone who competed and don’t forget ‘there is no such thing as can’t, don’t let anything hold you back, an I can attitude will take you a long way’

Adam Burgess from Sportshall Associates Limited, who provide the programme on behalf of England Athletics said:

“It’s always a pleasure to work with the young athletes in Cumbria, they’re so determined and enthusiastic.”

“Our young leaders are studying for a level 3 qualification in sport and this event provides them with a fantastic opportunity to develop their leadership skills as well as getting some hands on experience and giving something back to the sports community. Cumbria School Games is always a fantastic event and we are proud to support it”

The gymnastics finals comprises of six competitions for ranges in ability and school size, the competitions are split into Key Steps Gymnastics 1, 2 and 3 in Small schools and Key Steps Gymnastics 1,2, and 3 in Large schools. The finals were supported by 32 Young Leaders from Caldew School in Carlisle, whom have received accredited training prior to the event to give them the skills to undertake such tasks as team management, score keeping, and officiating.

Lindal & Marton did it for Team Furness and took the trophy for both Key Step 1 and Key Step 2 in the small schools competition. Selside School took Key Step 3 for Team South Lakes.

“It was great to see the standard of gymnastics improving year on year with pupils and teachers growing in confidence, we’ve all had a fantastic time today and it should be remembered that this was the culmination of almost 1500 children taking part in gymnastics across the county to get to the finals.”

“It’s wonderful to see all the children taking part in the activities over the last two days. The hard work put in by Cumbria Schools Gymnastics Association and the local School Games Organisers was evident throughout and the whole competition was exciting, making for an enjoyable two days. All of the young people involved gave some really great performances and it was great to see the first Cumbria School Games medals of 2018 handed out to teams across the county”.