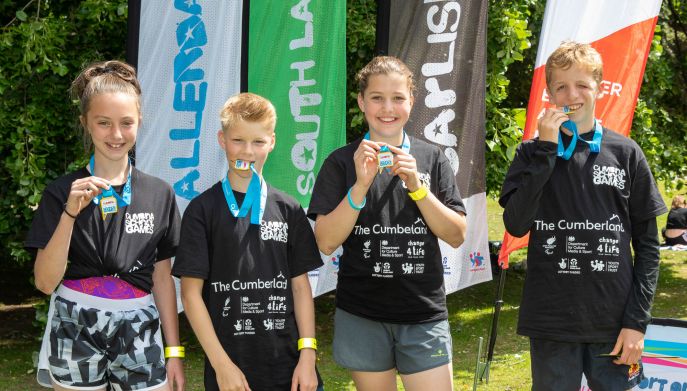 On Wednesday 26th June, six secondary schools from across Cumbria came together and took part in a Go-Tri festival, aimed at students new to triathlon, held at Keswick Leisure Centre.  The event was supported by Young Sport Leaders from last year’s winning school Austin Friars and volunteers from Keswick Triathlon Club.

This festival provides a unique opportunity for secondary school pupils in years 7 and 8 to take part in a Go Tri event. The participants swam 80m, cycled 3km and finally ran 1km with a sprint finish in Fitz Park.

“Today has been a resounding success. The children who took part put 100% effort in and supported each other in each swim, bike and run leg”.

British Triathlon would like to see the development of beginner activities in schools across Cumbria. It is hoped that this event will encourage more young people to undertake triathlon as a sport and be a catalyst for participation and development. Competitors develop many skills by taking part and we would hope that ultimately many are enthused to continue to explore competitive sport both in school and at local clubs”.

“It was great to see so many children take part with smiles on their faces. The support they gave each other was fantastic and to complete their first triathlon event is something they should be really proud of.”

"The MLD/SLD tag rugby event is a great event which brings together multiple programmes we deliver. A key target of the RFU is to bring the game to new audiences and provide a positive experience.

This festival allows us to do that whilst developing our young volunteers who volunteer in clubs. Thank you to all partners for providing the platform to deliver this event and we hope to create a sustainable link with clubs going forward".