Parkinson’s shouldn’t be a Barrier to Staying Active 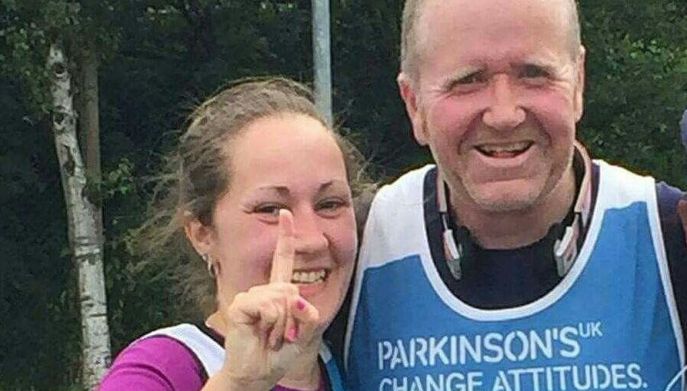 David Little, a former Fire Fighter, from Carlisle was diagnosed with Parkinson’s when he was just 39. He has joined up with ourselves to raise awareness of the value of physical activity when living with a long-term health condition.

Now 54-years-old, David a Volunteer Coordinator with Carlisle Carers said “I’m still as fit and healthy as I was when I was first diagnosed with it, and I put that down to all the activity I do. Being diagnosed with Parkinson’s might stop people from doing things, but for me I knew I had to keep active to help my body stay strong and hope to get this message to other people to help them stay strong too”

We Are Undefeatable is a campaign to support the one in four (15 million) people in England who live with one or more long-term health conditions, such as diabetes, cancer, arthritis and Parkinson's to build activity into their lives. The campaign recognises the unique barriers people with health conditions face.

In his spare time David volunteers as an Activities Coordinator for Carlisle Parkinson’s and through his volunteer work learned about the campaign. David said: “I’ve always been physically fit, physical activity helps keep my symptoms at bay – it definitely works, and I’ll keep doing it for as long as I can. Other people need to know this, it does help with symptoms. My passion is running, but I have also been doing Tai Chi for 14 years and have recently took up Yoga”.

According to Parkinson's UK, 1.2% of people with a diagnosis of Parkinson's are under the age of 50 (approximately 1,752 people). Most people associate Parkinson’s with a tremor, but this is only one of several symptoms that people experience, and each person has a unique set of symptoms which may include slowness of movement, tremor and stiff joints, amongst plenty of other symptoms.

David explained “It was once rare to be diagnosed at such a young age, but now it’s becoming common with advances in spotting the illness. I have a number of symptoms, I have problems verbally, I stutter a lot, my handwriting is spider-like, it’s illegible and I have various mobility problems, I can get stuck in one place and can’t walk, the proper term for it is ‘freezing’, I just have to wait for the symptoms to pass. It happens at least two or three times a day. You feel like your feet are glued to the floor”.

“I also have to be really careful to not fall over when running, the slightest incline or bump can knock me off my feet and I can’t get my balance back, I just go down with a thud”.

This doesn’t stop him though, David, a member of Border Reiver Running Group has racked up 15 different marathons including doing the London Marathon three times, the Edinburgh Marathon and New York Marathon. “I have raised a lot of money for charity, I don’t know exactly how much, but it amounts to thousands. I love running. I have been running for 30 years now, Parkinson’s hasn’t stopped me, it’s just made me more determined”.

Family is what keeps David going, his wife Ellen, two children Katie and Matthew and his granddaughter Olivia mean the world to him, they are all physically active. When they get together at Christmas, they always do a Christmas Day run and will be doing one again this Christmas.  The picture shows David with his daughter Katie who now lives in London, in the image she is holding her finger up, David said “this was the first time that my daughter beat me running, we were doing the X-Border 10K”.

If you would like to start up running, David would recommend joining a running group, a lot of them have the Couch to 5K programme or a similar beginners programme “I’ve been with them (Border Reivers) for two years and it makes such a difference running with other people, no-one treats me any different, one person said we don’t see you as Dave with Parkinson’s we see you as Dave one of the Border Reiver runners. There’s loads of us and you get so much encouragement, when at an event, we’ll always wait for the last one and cheer them on, it’s brilliant, I love it, and wish you’d known about it sooner.”

Whilst Coronavirus has put a stop to group running and many events, David has continued his running on his own and looks forward to the day he can get back to group.

Last year, David was awarded a Parkinson’s UK Award for his services to volunteering “I have raised awareness of Parkinson's in my local running group. I created the Parkrun for Parkinson’s and we did a tour of several parkruns across the North of England. As part of the local development team for Parkinson's UK I also want to set up a group for younger people with Parkinson's in my area and engage others with the condition in exercise activities."

Next year, Carlisle Parkinson’s will be starting a series of Dancing with Parkinson’s sessions run by local Dance Teacher, Susie Tate. “This is the next activity I am going to do; Susie is going to teach me the Tango, it is supposed to be really good for Parkinson’s, but I’m not sure why, only time will tell”.

If you are interested in starting the Dancing with Parkinson’s sessions, get in touch with Carlisle Parkinson’s Group 0344 225 3604