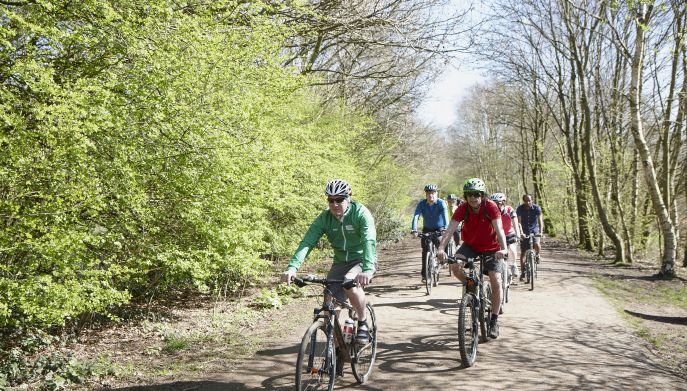 British Cycling and HSBC UK have recently launched HSBC UK Guided Rides, rides which are led by trained British Cycling ride leaders, and organised into three levels – easy-going, steady and challenging - with each level designed to appeal to riders of differing levels of ability, confidence or experience.

A key part of British Cycling and HSBC UK’s wider ambition to get two million people on a bike by 2020, around 1,000 HSBC UK Guided Rides will be rolled out across the UK.

Dickinson, who was recently crowned European under-23 Madison champion, believes that HSBC UK Guided Rides are the perfect way for newcomers to cycling to develop their confidence.

“The growth in the popularity of cycling over recent years has been great to see, but we know that there are still many people who maybe don’t have the confidence to get out on the bike by themselves. HSBC UK Guided Rides are a great way to build your self-belief and skills on a bike in a supportive, welcoming environment, and I’m sure the people of Cumbria, as well as visitors to the county, will really embrace the opportunity.”

With the Lake District having just gained World Heritage Site status, there are 13 special rides in the overall programme of 60 guided rides, the first of which takes place this Sunday. Lake District National Park Authority staff will be on hand to explain why it deserves such an accolade.

“Partnering with British Cycling to bring a progamme of free, HSBC UK Guided Rides across the Lake District is the perfect opportunity for visitors and local people to explore more of this spectacular National Park and find out why it was recently designated a World Heritage Site. Whatever your age or ability, there will be a cycle ride for you!”

“We know that our support for cycling continues to make a lasting difference for the better and improves the health and wellbeing of people across Cumbria.”

“The partnership with British Cycling and HSBC UK will ensure that we can provide an increased number of cycling opportunities for the county in 2017 and beyond, and are committed to getting more people on their bikes than ever before.”

The next three HSBC UK Guided Rides taking place in Cumbria are as follows: