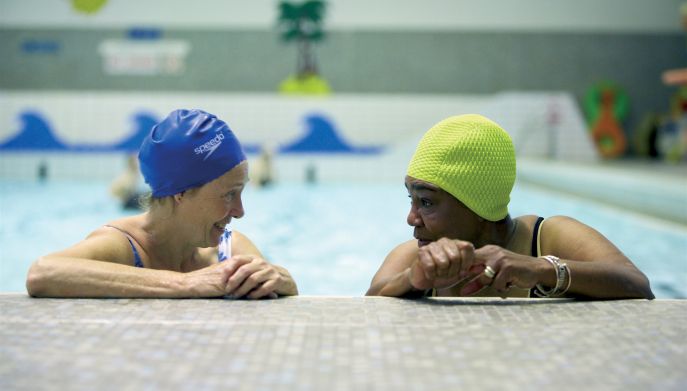 One in three adults in England cannot swim according to new statistics released today.

Now Swim England is to highlight the benefits of swimming as a valuable life skill in a nationwide drive to encourage more adults to take the plunge and learn how to swim.

Through the #LoveSwimming campaign, the achievements of adults who have conquered a fear of the water or simply decided it’s never too late to learn will be celebrated in a bid to inspire others.

The latest figures show 14.2 million – one in three of the adult population in England (31 per cent) – cannot swim one length of a 25m pool.

Among them is Helen Mbaziira, who was keen to learn how to swim after her daughter came into difficulty in a swimming pool and she felt helpless and unable to save her.

Originally from Uganda where swimming lessons were not part of the culture and never really encouraged, the 43-year-old developed a fear of the water after witnessing many drownings.

She admitted she was worried what people might think about the fact she was not able to swim.

Helen, who now lives in Oxford and learned to swim at Didcot Wave Leisure Centre, said: “It’s been my goal, my dream, to be able to swim and I’ve gone for it.

“If there is no public-associated stigma as an adult who couldn’t swim, at least there was an internal stigma for myself. I was really worried what people might think of me and why I have not been able to swim up until this point in time.

“I have made sure my daughters can swim but I’ve never been able to enjoy it with them.

“I’ve now had a number of lessons and I’m very proud of myself. Coming from not being able to swim to now swimming at least 15m, it’s fantastic.

“I’ve exceeded what I expected to achieve but I’m not going to stop now. I’m going to carry on swimming and keep surprising my family and my wonderful swimming teacher. I can’t wait to put into practice everything I’ve been taught.”

Jane Nickerson, Swim England chief executive, praised the courage of people like Helen who decide to learn to swim as an adult.

She said: “Swimming is a valuable life skill and it is so important that we continue to highlight its benefits in a bid to reduce the number of individuals unable to swim.

“By telling stories of inspiring people like Helen who have learnt in later life, we hope to encourage more individuals to take up swimming.

“Through the #LoveSwimming campaign, we’ve shown the benefits of swimming on mental wellbeing, physical health, social cohesion and family connection.

“I believe that those who learn to swim in later life should be celebrated. The sessions are welcoming, supportive and very well run but it takes a real hero to learn in their adult years.”

To find out more about swimming facilities and lessons near you visit swimming.org/poolfinder and #LoveSwimming.

Swimming in your area