Home   News   Archive   Give a #BigThankYou to your Volunteers

Give a #BigThankYou to your Volunteers 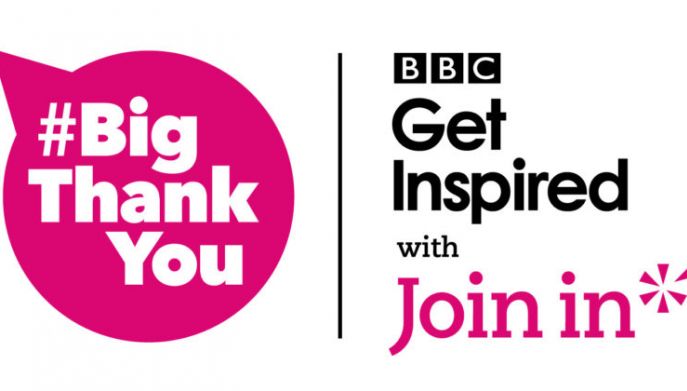 Make their year one to remember: Say a #BigThankYou to grassroots sports volunteers

Today marks the beginning of the annual #BigThankYou, the largest celebration of sports, recreation and physical activity volunteers in the United Kingdom. The #BigThankYou campaign is led by Join In (a part of the Sport and Recreation Alliance) and BBC Get Inspired.

Every day, individuals are contributing to their local communities, whether it’s coaches, board trustees, designers, officials or mentors. Join In, the national brand for local sports volunteering, and BBC Get Inspired are calling for every grassroots club and group to show just how much these local heroes are valued.

Leading the charge for the #BigThankYou campaign is Anne Usher (nee Dickens) MBE, Paralympic Champion in the KL3 200m class for paracanoeing. Anne has a long history of sports volunteering and truly understands the impact of volunteer commitment:

“Volunteers make a massive difference to sports clubs up and down the country, without them sport simply wouldn’t happen. I would therefore encourage everyone to join me in saying a #BigThankYou to all volunteers at every level of sport. I will never forget the fact that it was a group of dedicated and passionate volunteers at my club who transformed me from paracanoe novice to Paralympic gold medallist.”

The night of Sports Personality of the Year

The #BigThankYou will culminate on Sunday 17 December during the Get Inspired Unsung Hero Award at BBC Sports Personality of the Year in Liverpool. The award provides the centre piece to the #BigThankYou and honours sports volunteers in local communities who go above and beyond to encourage people to participate in physical activity. There will be 15 regional winners with one crowned the BBC Get Inspired Unsung Hero of the Year 2017 in front of a venue full of sporting stars and legends live on BBC One.

Immediately following the award, BBC Get Inspired will provide a social media opportunity to celebrate all our dedicated volunteers. Grassroots clubs and groups will be invited to Twitter, Facebook and Instagram, to broadcast their #BigThankYou celebrations.

Our sporting stars will also get their chance to say a #BigThankYou. BBC Get Inspired and Join In have been collecting ‘selfies’ from hardworking and devoted volunteers from around the country. These volunteer headshots are being entered into a selfie-gallery and as sports stars walk down the red carpet they will be asked to stop and take a selfie with the volunteer’s image. The photographs will then be tweeted out as a #BigThankYou to both the club and volunteer.

How can you get involved?

Between now and 17 December, grassroots sports clubs and organisations across the country are encouraged to download the #BigThankYou toolkits at joininuk.org and begin thanking their outstanding volunteers. The toolkit includes a variety of resources to celebrate and share volunteer appreciation on social media through photos, events, stories and other creative and fun ways using the hashtag #BigThankYou.

Stay tuned to Join In’s Twitter page for our Thunderclap to help us cap off the campaign with a nationwide #BigThankYou to volunteers on the night of BBC Sports Personality of the Year 2017.

Turn your organisation’s social media page into a #BigThankYou to your volunteers on the night by sharing all the content you have collected during the campaign. Make sure to include the hashtag #BigThankYou to maximise the impact.

For more information, details and ideas on how to get involved in the #BigThankYou visit joininuk.org