Have your say – Consultation on improving walking and cycling routes in Barrow, Kendal & Carlisle 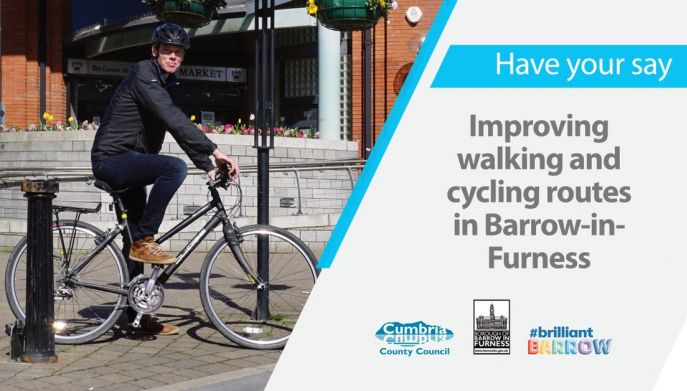 Cumbria County Council has launched a consultation to help shape plans to improve the infrastructure for cyclists and pedestrians.

They want your feedback on the existing cycling and walking infrastructure, and your thoughts on where improvements to active travel routes could be made.

Local Cycling and Walking Infrastructure Plans (LCWIPs) are being developed to enhance facilities for cyclists and pedestrians in a number of towns in Cumbria.

Consultations are initially taking place for Barrow-in-Furness, Carlisle and Kendal. LCWIPs will allow the County Council, in partnership with Cumbria Local Enterprise Partnership and Cumbria’s six district councils, to identify and deliver improved cycling and walking provision for local areas.

In Barrow-in-Furness, proposals include:

In Carlisle, proposals include:

In Kendal, proposals include:

Cllr Keith Little, Cumbria County Council Cabinet member for Highways and Transport, said: “Cycling and walking have many benefits, not just for our mental and physical wellbeing but also for improving air quality, reducing congestion and making our towns more vibrant. During the pandemic we’ve seen an upturn in cycling and walking for exercise and safe travel. With the Covid-19 restrictions starting to ease and more people returning to work, we are looking at measures to support this shift towards more active travel.

“To help develop our proposals, we are inviting the public to give us their views on the proposed routes. Identification of improvements will follow, taking account of the feedback we receive, and we will consult further on those later this year. We are initially consulting on proposals for Barrow-in-Furness, Carlisle and Kendal, and will be launching consultations for other towns in Cumbria in due course.

“I’d strongly encourage people to take the time to get involved, read the consultation documents and give us your feedback - it’s important that local people have their say, so we build up a picture of where the priority areas for improvements are. Your views are important to us - they will help shape where improvements are required for Barrow-in-Furness, Carlisle and Kendal, so we can develop the best possible schemes.”