This Girl Can is back!

This Girl Can is a celebration of active women who are doing their thing no matter how well they do it, how they look or even how red their face gets. Developed by Sport England, we want to help women overcome the fear of judgement that is stopping too many women and girls from joining in.

With the This Girl Can campaign back in action, our media partners at Go Active are taking a look at the stories of Cumbrian women who are getting out there and getting active.

Nicole Regan is the first to share her story of beating the fear, and transforming from coach potato to 10k runner:

"I've always been larger than the average. I blame my genes and a love of cream cakes.

It never really bothered me but I knew, approaching my 40s, that I should really do something about it after years perfecting the art of being a couch potato.

It was lucky an ad for a beginners running club crossed my path. I was scared. I didn't do running. Why would I? I had a car. But I signed up and it changed my life.

I've entered a ballot for a half-marathon later this year and have enough 10ks booked to circumvent the world twice. Okay, that's an exaggeration. Once."

Read the rest of Nicoles story, and others' like her in Cumbria, Go Active>> 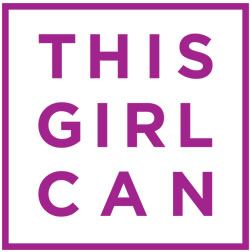