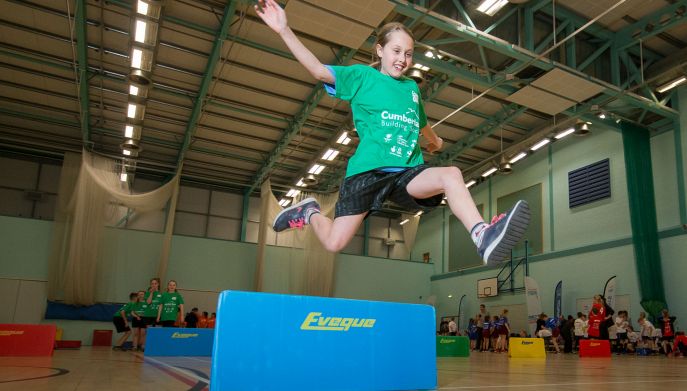 Penrith will be a hive of sporting activity this week as around 470 children and young people from across Cumbria will represent their districts and compete at the Cumbria School Games Spring Festivals. Primary and Secondary school teams representing their districts have qualified through intra and inter school competitions organised by district School Games Organisers.

The Spring events will start on Wednesday 29th March with 72 young participants from schools across the County taking part in the U16 MLD/SLD Tag Rugby Festival.

A further 144 pupils will descend on Penrith Leisure Centre to compete in the Primary Schools Sports Hall Athletics Finals in the afternoon.

The new Cumbria School Games mascot will make its debut at the Spring Event. The mascot, named Spirit after the ‘Spirit of the Games’ was designed by 10 year old Bethan Steadman from Broughton Primary School in Cockermouth. Bethan’s design was chosen from hundreds of entries from schools across Cumbria. The competition was judged by Cumbria County Athletic Champion Olivia Mason, who received the Junior Personality of the Year award at Cumbria Sports Awards 2016 and Cllr Ian Stewart, Portfolio holder for Public Health & Communities at Cumbria County Council.

"Cumberland Building Society has a long history of supporting Cumbria School Games and we are delighted to be main sponsor again for this year’s event. The Games are always a fantastic occasion, providing an opportunity for Cumbrian school children to take part in a friendly but competitive event. It’s always brilliant to see the array of talent coming from youngsters across the County and the level of enthusiasm for sport”

In addition to the competitors, around 65 young people from across Cumbria have been trained in various roles to lead and officiate the Cumbria School Games Spring Festivals.

“Cumbria School Games provides a great opportunity for Children across the County to get involved in a variety of Sports and to compete in a fun and supportive environment. The Games also gives young people opportunity to try different roles within sport, whether it is as a player or referee, the programme provides excellent opportunities for all young people to make a positive and active contribution to their school.”