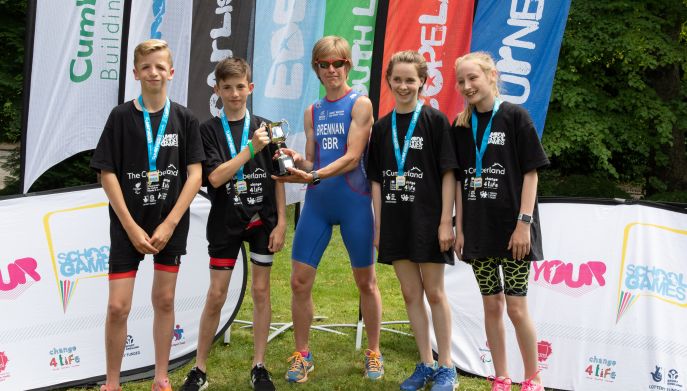 This festival provides a unique opportunity for secondary school pupils in years 7 and 8 to take part in a Go Tri event, and as a result of the success of the event, the organisers are keen to incorporate it in to the Cumbria School Games calendar moving forward.

The participants swam 80m, cycled 3k along the Keswick to Threlkeld old railway path and finally ran 1k with a sprint finish in Fitz Park.

“It’s first time I have coordinated a team relay triathlon event. The children who took part put 100% effort in and supported each other in each swim, bike and run leg”.

British Triathlon would like to see the development of beginner activities in schools across Cumbria. It is hoped that this event will encourage more young people to undertake triathlon as a sport and be a catalyst for participation and development. Competitors develop many skills by taking part and we would hope that ultimately many are enthused to continue to explore competitive sport both in school and at local clubs.

“It was great to see so many children take part with smiles on their faces. The support they gave each other was fantastic and to complete their first triathlon event is something they should be really proud of.”

Sporting Guest, Rennell Brennan enthused the young people and teachers with her story of leaving work as a PE teacher and becoming a triathlete at the age of 45. She went on to achieve 2nd position in the 2017 Targu Mures ETU Cross Triathlon European Championships at and 7th place in the 2016 Snowy Mountains ITU Cross Triathlon World Championships.

“I’m humbled and honoured to be here today, it’s been really interesting to be on the other side after 24 years of teaching. I’m proof to show that you are never too old, but it’s fantastic to see these youngsters getting this opportunity to do this now, they are the future, you never know who you’re inspiring and it’s been great that I’ve been able to give back.”