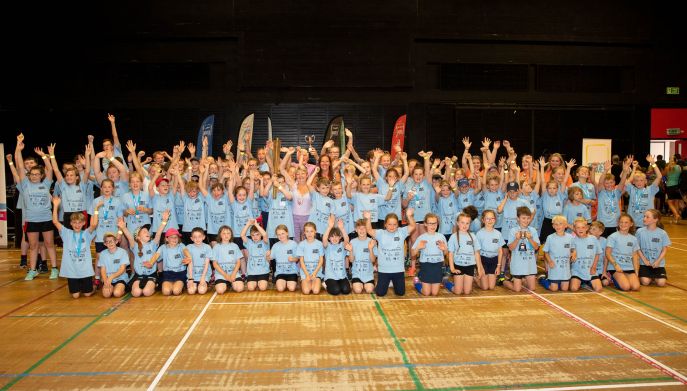 Young people across Cumbria showcased their talent in county-wide festival of sport yesterday.

A great day was had by all at the Cumbria School Games.

Wednesday 11th July saw over 600 school children from across Cumbria compete across Carlisle’s sporting facilities. The county finals of 9 different sports took place including golf, tennis, netball, orienteering and hockey, as well as table cricket, table tennis & boccia. School children, from mainstream and special schools from across the county competed.

The event is the last of four county finals that have taken place in Cumbria this year. A total of around 1500 young people aged between 5 and 19 have competed in 13 different sports.

Mike Zeller from BBC Radio Cumbria opened up the event at The Sands Centre, where children chanted ‘It’s Coming Home’ live on the radio ahead of the England v’s Croatia game. Ash Randall, Professional Football FreeStyler and multiple Guinness World Record holder wowed the crowd with his football skills. Ash involved the children and teachers in his performance which included a showdown to see which teacher was better. Ash, a regular at School Games across England has travelled to over 30 countries around the world performing his skills and working with and featuring in videos with sport stars such as Pele, Eden Hazard & Jose Mourinho.

All the teams participating in the finals had qualified via a series of local competitions, and the standard of competition across the sports represented this. The day was an opportunity for many of the children to experience a major multi-sport event for the first time.

Roger Jackson sport lead for the Orienteering competition said: “We had a very successful competition, the Carlisle Parks (Bitts Park and Rickerby Park) proved to be excellent venues for orienteering. We had some impressive running! The Young Leaders also did a great service once again, taking on a job in a sport and dealing with it perfectly.”

Anne Craddock sport lead for the Boccia competition based in The Sands Centre said: “All of the districts are playing Boccia which is really important. Boccia is a very inclusive game and it’s been good to see so many young people enjoying the competition here in Carlisle.”

Nationally, the programme is backed by National Lottery funding administered through Sport England. The county finals events are delivered and developed by the Local Organising Committee supported by Active Cumbria, the Sport and Physical Activity Partnership, who are part of Cumbria County Council’s Public Health team and is made possible through local qualifying competitions organised by six district School Games Organisers.

"Every year we support a wide variety of activities that provide opportunities for children that will benefit their physical wellbeing, so we are proud to once again be supporting Active Cumbria’s School Games this year as the main supporter. Today was a fantastic occasion, providing an opportunity for Cumbrian school children to take part in a friendly but competitive event. It was brilliant to see the array of talent coming from youngsters across the County and the level of enthusiasm for sport”

“The students who took part today represented their areas with pride and enthusiasm. The various venues in Carlisle were hives of competition and the there was a real sense of enjoyment amongst those taking part.

The sheer enthusiasm shown at the closing ceremony was certainly a testament to that. Organising an event such as today and the other competitions that take place through the year takes a lot of dedication. I would like to thank all the student volunteers, staff and parents who contribute so much to the success of the school games.

Our School Games Organisers undertake work every week to help support schools in these sports and without them the students would not have the Level 2 competitions that enable them to qualify to take part in these county wide events today.

The events today of course are supported through the continued sponsorship for which we are most grateful; it is through such support that we ensure that the event is a magical one for the students.”

Full results are available at www.cumbriaschoolgames.org