Fit, healthy and up with best - that's Cumbria's adults.

Cumbria has been named as one of the top three counties in the country for adults taking exercise. New figures show a significant increase in the numbers of people across the county taking part in sport and physical activity.

For the past three and a half years Active Cumbria, along with Cumbria County Council and the Cumbria Sport and Physical Activity Forum, partners include Natural England, Cumbria Tourism and Lake District National Park  have encouraged Cumbrians to exercise for thirty minutes three times a week. The results, from Sport England's Active People 4 survey, show 25.5 per cent of the adult population in Cumbria are doing their 3 x 30 minutes of moderate intensity sport of physical activity. This is set against the three year target of 24.9 per cent, starting from a baseline of 20.9 per cent when the target was introduced. Cumbria is 3.7 per cent ahead of the national average and 3.1 per cent more than the north west average.

The results play an even more important role for Cumbria as they have been used as a stretch target for the Local Area Agreement (LAA), which will result in a reward grant coming into Cumbria to the value of £692,000.

Active Cumbria as been working closely with Cumbria County Council, district
authorities, School Sports Partnerships, Cumbria Primary Care Trust and local sports clubs and coaches to increase and sustain participation in sport and physical activity. Each district authority in Cumbria and a wide range of local deliverers have played a huge part in the increase and the table below highlights the increase for each district in the last four years. The most notable increase in Cumbria has been in Copeland which has increased by 9.6% over the last four years. (see attachment for breakdown of districts)

The partnership also took the 3x30 message to the streets of Cumbria this year. The 3x30 campaign was aimed at trying to get more people to adopt simple measures to build up the amount of activity they do in their daily routine.
A roadshow team visited a number of towns and villages stopping off in town centres for active interaction with the passing public from hula hooping to basketball. The 3x30 team also visited four key events across the county including the Cumberland Show and the Windermere Air Show raising awareness of the opportunities available for people to get active and stay healthy.

In Cumbria the cost of inactivity has been calculated as more than eight million pounds in NHS spending each year Cumbria County Council leader Eddie Martin, said:
"The results of this survey show we in Cumbria are committed to encouraging exercise and sporting activity. The benefits of improving health are wide ranging and we will continue to strive to make Cumbria one of the most appealing places to live for one of the healthiest populations. Simple recreational activities such as cycling, walking and swimming can have a
significant effect and make a real difference to people's health and wellbeing."

Active Cumbria Director Eddie Edge, said:
"Cumbria has had a difficult year to say the least with some sporting facilities wiped out in the floods so this really is fantastic news. It has been a massive effort from all involved and is a credit to the partnership. It was, and still is, crucial that we as a partnership continue to strive to impact positively on the lives of people in Cumbria, in challenging times we need to continue to work
together to offer them the opportunities to participate in sport and physical activity on a regular basis."

Active Cumbria Executive Board Chair, Cathy Wynne, said:
"As the changing landscape brings about difficult and challenging times for those delivering public services it is great to be involved with a partnership that embodies what working together can achieve. Within the region, we are blessed with the most spectacular environment for being active and in doing so we can all improve our health. I would urge everyone in the county to get out there and explore the fantastic environment that we have on our doorstep." 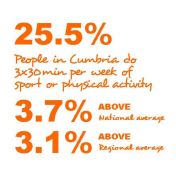