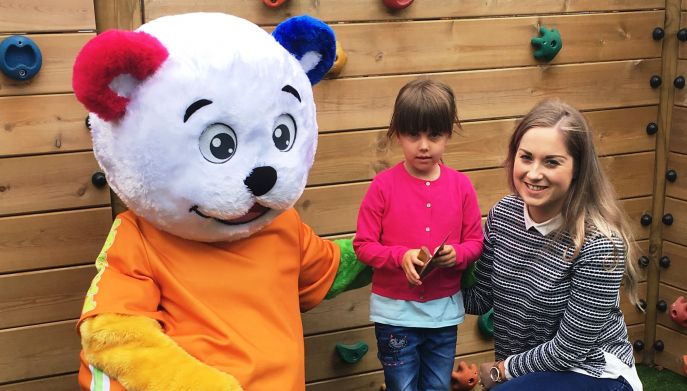 Active Cumbria is pleased to announce the winners of the Cumbria School Games Poetry Competition for 2017.  Over 200 entries were received for this year’s competition and the standard was exceptionally high.

The overall winner was Beth Nevinson, aged 11 from Moresby School in Whitehaven. Beth joined BBC Radio Cumbria’s Sport Presenter James Phillips at the Opening Ceremony of Cumbria School Games to receive her prize and read out her poem to an audience of 650 young people taking part in the games and various sporting stars including World Champion inline Skater Jenna Downing. James said:

“It’s not often you are upstaged by an 11 year old. I have been doing this job for 12 years and Beth hasn’t just written a brilliant poem but delivered it better than I ever could.”

Beth entered her poem along with over 200 other young people across Cumbria and was chosen by the Local Organising Committee & Catherine Kay, Education Officer at the Wordsworth Trust based in Grasmere as the overall winner.

Catherine said:  “I chose Beth’s poem ‘Don’t’ Stop’ as the winner because I enjoyed the beautiful way she told the story of running her cross country race, it encompassed the Cumbria School Games values of determination, respect, passion, self-belief and honesty. Beth finished the poem with the sentence, ‘11th out of 50 Yippee!!” she was happy with this result and the excitement and determination of taking part in cross country shone through the poem”

The competition is open for children across Cumbria and three prizes are given at Key Stage 1, 2 and 3, the winners receive a £50 book token with the overall winner receiving a prize of a poetry workshop with famous Children's Poet, John Rice from Sedbergh.

Beth who is currently in Year 6 will be going to secondary school after the summer break and will share the prize with her new class in Whitehaven Academy.

Lindal and Marton School had a fun packed assembly on the last day of term when a surprise visitor made an appearance. The Cumbria School Games Mascot ‘Spirit the bear’ made the visit to the school not only to say hello to all of the pupils who entered the competition, but to one very creative young person who’s poem won the Key Stage 1 prize. Eliza Roberts, aged 4 who was presented a £50 book voucher.

Spirit the mascot also made an early morning surprise visit to Dallam School to meet the key stage 3 winner, Miles Phillips. Miles received his prize from Spirit in front of all of his peers in his registration form, a memorable moment to end the school year.

Richard Johnston, Senior Manager at Active Cumbria said: “The poetry competition was a great opportunity for us to connect the values of the school games to the national curriculum through creative writing. The standard of the entries we received was extremely high, and our winning entries were an exceptional standard. I would like to thank all those young people who entered the competition.”

The poetry competition was open to any school within Cumbria for KS1, KS2 & KS3 asking individual pupils, to write an original poem based on any of the six School Games Values: Determination, Passion, Respect, Honesty, Self Belief and Teamwork.

To find out more about the Cumbria School Games in Cumbria go to www.cumbriaschoolgames.org

Make sure your school is signed to take part in the School Games at www.yourschoolgames.com