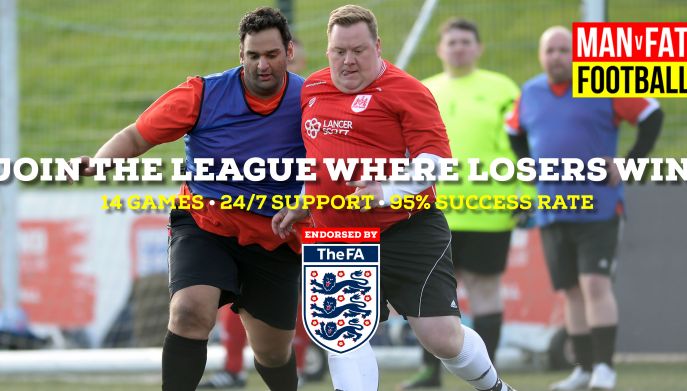 FOOTBALLERS who have let their exercise regime fall by the pitchside are being urged to lace up their boots once more.

Man v Fat is a scheme endorsed by the FA and supported in Cumbria by Active Cumbria part of Cumbria County Councils Public Health Team.

The scheme is a 16-week football league for players who are classed as overweight or obese. The league is geared to help players lose weight through six-a-side games, with a unique scoring system based on individual and team weight loss.

Every player is in the same situation and wants the same thing - to enjoy football, lose weight and get healthier. Uniquely, the league is decided not just on points won, but pounds lost. Support is offered to every player with unique resources and inspiration available 24/7 to help you lose weight, get fitter and enjoy the beautiful game.

Andy Dyke, national participation manager of recreational football at the FA, said: “Football doesn’t begin and end with the professional game, there are different levels and styles of football played throughout the UK. MAN v FAT Football is a brilliant initiative for anyone who wants to address their weight and start working their way back into playing football. The results of the leagues are extremely impressive and we are excited to see the impact this could have on men’s health across the country and around the world. You might be thinking that your footballing days are behind you, but MAN v FAT Football is a great bridge back into the national game and the FA are happy to back the scheme.”

Roger Smith is a coach for MAN v FAT He said: “I took part in the first Bridgwater league and lost 2.5st in 14 weeks and am extremely proud of being part of a scheme that has changed the lives of so many men”

Deborah Earl, Cabinet Member for Public Health & Community Services at Cumbria County Council said: “Tackling obesity is a top priority in Cumbria, as is tackling inactivity. This initiative brings both of these priorities together wrapped up in a game of Football, which is arguably England’s most popular sport. Initiatives such as this that combine physical activity and managing weight can only be a positive step forward and I hope that the leagues take off”.

Based on Man V Fat Football Leagues already set up across the country, it has been found that 95% of players lose weight and get fitter. The scheme is already proving successful with 62% hitting their 5% body weight target.

Subject to the number of applicants, leagues are planned to begin in Carlisle, Workington, Barrow and Kendal with dates yet to be confirmed.

If you love football but hate being fat, register today for just £1:

or email dan@manvfat.com for more details.