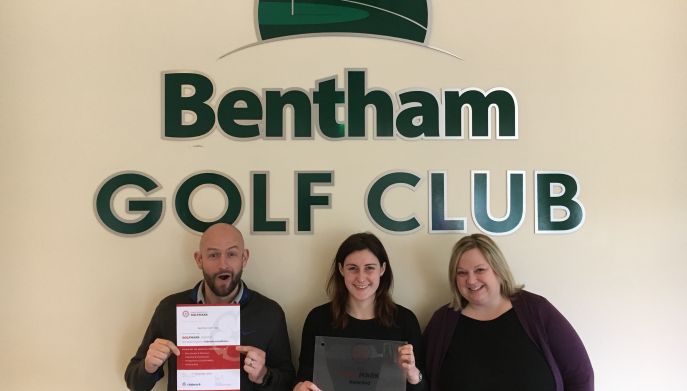 Bentham Golf Club is the second club in the County’s Golf Partnership to be presented with a new national award that recognises clubs that are helping grow the sport.

GolfMark is awarded to clubs that demonstrate hard work and dedication to bringing new players into the sport as well as sustaining and developing their offer for members.

The commendation has been developed by England Golf and helps clubs achieve high standards in four key areas – recruitment and retention; management and sustainability; coaching and competition; and safeguarding juniors.

GolfMark serves as a signal to would-be players that a club offers the perfect environment to take up the sport and enjoy its health and social benefits as well as the potential to go on and take up club membership.

Clubs achieving GolfMark can enjoy a number of benefits of their own – including increased membership, raising the club’s profile, development plans for coaches and volunteers as well as greater access to funding.

The GolfMark award is a significant achievement for the club which has been through a period of renewal itself.  The clubhouse and function suite including the 1922 Bar and Kitchen have been recently refurbished and the 8 bay Driving Range just opened as part of the ever extending facilities available at the club.

Driven by the Club Manager Isabel Marshall the club had been working towards the old version of GolfMark when England Golf launched the new version and the club felt it would be better to achieve the very latest version of the kitemark.  Whilst it was realised that there was a significant amount of work involved there was a great deal of enthusiasm to showcase the excellent work taking place at the club.

Isabel said  “I am extremely pleased that the club has attained this award.  It shows that the club is well placed for the future and it has also identified areas where further improvements could be made and this will be part of the work going forward”

The award will be proudly displayed at the club and will provide members with the assurance that it is being run in a professional business-like manner while also giving parents the reassurance that the needs and safety of children have been thoroughly considered.

Becky Underwood, Development Officer for the Cumbria Golf Development Group, said: “I would like to congratulate Bentham on this well-deserved award for all the hard work they have put into helping the sport grow and attracting would-be players and members of all ages.

“This demonstrates the club's commitment to encouraging and creating opportunities for people to participate and enjoy the game of golf. All those involved in reaching this achievement deserve a vote of thanks.”

Further information on the New GolfMark can be found on the website, www.golfmark.org