Mind Ya Marra’s is a group that has been set up by Mirehouse Community Centre, to support local men who were living with poor mental health. The group has grown in number and now expanded to support a very diverse group, these include older gentlemen, some with physical disabilities and some with learning disabilities. All are very supportive of each other and a “gang” has been formed.

Since the onset of COVID 19 due to isolation, the mental & physical health of the group in general plummeted.

Mind Ya Marra’s thought that it would be great for their group to get involved with some sort of sport, they wanted to start with walking football or walking/tag rugby.

They were unfortunate to be close to and have good relationship with local rugby union and football clubs and both offered to support the initiative. The rugby club offered their small astro turf pitch, the group looked to offer skill based/ fitness sessions, leading to 3 v 3 socially distanced games of football (keeping 2m apart), they were keen to extend to Walking Rugby once government restrictions allowed.

The Mirehouse community is in the countries bottom 10% of IMD areas, it has 19% of households in fuel poverty and 33% of children live-in low-income households. 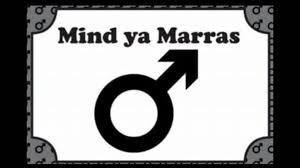